The science behind the perfect joint

How to engineer pre-rolls for an even and enjoyable smoke

Humans have been consuming cannabis for centuries. It has historically been smoked through pipes, hookahs, or a chillum for both medicinal and ceremonial purposes. While tobacco cigarettes have been around since the 9th century, it wasn’t until the mid-1850s that cannabis joints were first documented as being used recreationally by Mexican laborers, though it probably began earlier than this. Marihuana joints have long been a convenient means of administering the psychoactive components of hemp and cannabis.

In today’s modern culture, cannabis is more prevalent and widely accepted than ever before. Sharing a joint with friends still has ceremonial-like attributes that are loved by both seasoned smokers and newcomers. Dispensaries will often include joints as gifts or promotional incentives to medical and recreational consumers. Despite its history and widespread use, commercial pre-rolled cannabis joints often fall short of delivering an enjoyable smoking experience. It is not uncommon to hear about customers who had a bad experience from pre-rolled medical cannabis joints. Harshness, uneven burning, or finding a joint impossible to ignite are all too common. Sometimes, having the best ingredients isn't all that it takes to construct a desirable product. What can manufacturers do to deliver more consistency in pre-rolled joints?

Variables of the Production

There are variables that are often overlooked in pre-roll manufacturing that can make it difficult to deliver a consistent, optimized end product. It’s not only the ingredients, from flower to paper, that make a cannabis joint work – the construction of the joint is just as important. The cannabis flower needs to be broken into the right size pieces and packed to the correct density for an even and efficient draw. This article will detail our investigations into engineering the best pre-roll. We focus on cannabis milling, particle size and packing density for the perfect pre-roll. And we give some tips and tricks of how to scale the pre-roll production efficiently.

A scientific primer about cannabis joints

A cannabis joint is made up of three main parts:
1. Wrapping paper
2. Mouthpiece
3. Cannabis flower filling

The wrapping paper contains the cannabis and gives the joint its shape. It also acts as a funnel to direct the air and smoke from the burn tip to the mouth of the user.
The mouthpiece, either a filter or a simple crutch, gives the user’s lips something to grasp and offers structural rigidity to keep the airways open at the end of the joint. Its diameter can be adjusted to further modulate airflow characteristics. Finally, it acts as a gate to prevent cannabis from falling out. The cannabis flower has to do many jobs at one time. It is the source of the active ingredients for the smoking vapor. The interlocking cannabis flower pieces are the structural support to keep the joint erect, but also the spaces in between these pieces are the airways through which the smoke flows to the consumer.
And finally, the cannabis flower is the fuel for the ember at the tip of the joint.

Contrary to common beliefs, the vapor is not created at the burn site of the joint. The burn site is merely the heat source to generate hot air that passes through the joint to pick up THC and terpenes on the way. An industry expert described a joint as just a vaporizer with a dirty heat source. From this description of the architecture of a joint and its principal function, it becomes apparent that the particle size and packing density of cannabis flower must have a great influence on the joint performance.

We set out to study the effect of particle size and packing density on joint performance. A secondary motivation for these experiments was to upgrade the inefficient manual production process employed currently.
Our benchmark for the study was a joint produced by the current manual process with a hand grinder. To produce ground cannabis of various sizes, we utilized a FRITSCHUniversal Cutting Mill PULVERISETTE 19. We milled batches of flower to various sizes with the respective sieve cassettes of 0.5, 1, 2, 4, 6, and 10 mm. These seven different batches of flower particle sizes, including the hand-ground, were filled into 98 special pre-roll papers from RAW. To investigate the effect of packing density, for each individual particle size, we produced multiple joints with different filling methods. The paper cone of the preroll was either filled just by gravity, or we would tamp down the flower to add density to the joint. Here we employed a variety of tamping routines, ¼ / ½ / full tamping, tamping every 1/8th.
Eight volunteers for this study were given a survey to answer specific questions about pre-roll performance. Each tester was given various joints with different packing densities and grind size.

Questions were as follows:

1.Was the joint easy to light?
(Yes/No)
2. How did each joint burn? (Three answer options: yes, uneven, burned poorly)
3. Did you have to relight the joint? (Yes/No)
4. How did each joint smoke? Were there any draw/air flow issues? Did they progressively worsen or get better with use? Which sample performed well? (short text answer)
5. Was the joint rigid or floppy near the filter/crutch? (Yes/No)
6. How was the smoothness of the smoke for each joint? (Scale 1-5 / Harsh-Smooth)
7. Any other problems or positive experiences with this pre-roll? (short text answer)

The testing protocol focused on two aspects of the joint quality. Firstly, the testers evaluated the rigidity of the joint. One aspect of joint composition that needs special attention is the dreaded “floppy joint.” This is when the packing density of cannabis near the narrow end of the crutch or filter is not optimal, creating structural flaccidness and unpolished aesthetics. Secondly, the draw behaviour of the joint was tested to ensure a pleasurable smoking experience.

A total of 29 different joint types were produced, each with a different combination of particle size and packing density. The particle size was produced through the use of different mill sieves or by hand grinding. The packing density was set by different packing patterns. A cannabis joint was defined by a code made up of particle size (millimetre size or HG for hand-ground) and the packing method, i.e., 4D (4 mm particle size and tampered every ½ filling).
This gave following sample options: .5A, .5B, .5C, 1A, 1B, 1D, 1E, 2C, 2D, 3E, 4A, 4B, 4C, 4D, 4E, 5A, 5E, 6A, 6C, 6E, 10A, 10B, 10C, 10D, 10E, HGA, HGB, HGC, and HGD. A few joints were test-smoked by the study designer to ensure usability. After confirming the applicability to the test, eight testers were given a random assortment of joints varying in particle size and packing density. The 4 mm particle size pre-rolls were the middle test group; as such, duplicates were distributed to ensure consistency in our test group data. Additionally, the use of mixed grind size joints was investigated. For those, four particle size combinations were tested against a 10 mm and a hand-ground joint option. The sample options were: .5/4C, 10/4C, 2/6C, and 5/4C vs. 10B and HGD. For this test run, five testers sampled 25 joints.

In the first blind survey, the joints were scored for the smoking qualities deemed most important (smoothness of smoke, even burning, draw/airflow, rigidity, and not having to relight). While most of the joints in the test were smokable, it was apparent that the most important metrics were affected by particle size. Test joints in the 0.5-1 mm range had reduced airflow due to constraints by the smaller particles. Less airflow resulted in warmer vapor temperature, causing testers to note harsher smoke. Conversely, loose packing densities coupled with larger particles made the joints burn poorly and exhibit similar harsh smoking qualities. Figure 2 shows the compounded and weighted test scores for all joint samples. The hand-ground ½ packed joint (HG-D) was preferred as the overall winner for its all-around performance. This does not come as a surprise when hand grinders have long been a staple in the smoking community. The results from the single particle size experiments showed that hand-ground joints offered some of the best smoke experiences. This led us to wonder if the varied particle size from the hand-grinding offers additional benefits. With a varying particle distribution, the user gets harshity throughout the joint from the mixed particles forming a better interlocking structure, acting as structural support. The larger pieces of cannabis help to create better air pathway for the smoke to travel through.
To answer this, a second test group utilized the highest scoring joints from the first survey (HG-D, 10 mm-B) along with a new batch of test joints that contained two precision-milled particle sizes mixed together from the FRITSCH milling system. We hoped to mimic the hand-ground smoking qualities by finding two particle sizes that mixed well in a 50/50 ratio. The mixed particle joints were packed every ¼ as this density offers the most consistency and is a common packing density employed on many semi and fully automated joint fillers. By exploring combinations of the full range of particle sizes at our disposal, the middle test group of 2 mm/6 mm received the highest praise in the test (Figure 2). The displacement of this particle range closely resembled the hand-ground joints in smoking characteristics, including smoothness, draw, and an even burn that did not require relighting. Producers can fine tune the ratio of particle sizes to cater to the flower they are processing, and to address things like airflow and rigidity.

• Smaller particle size will allow for more fill volume.
• Most stems were removed prior to filling. We used popcorn buds, so stems were minimal. We did not exhibit any stem issues throughout our testing.
• To combat the stem problem at scale, classifier screens separate stems by hand before milling or use wire screens to clean the milled flower.
• Care needs to be taken during the first fill, where cannabis comes into contact with the paper filter. Ensure proper packing here to avoid floppy joints.

It was demonstrated that hand-ground cannabis flower is one of the best material sources for cannabis joints. While hand grinders are tried and true, they are not scalable, labor-intensive, and only allow for a few grams to be ground at a time. One could argue that a whip-style mill, food processor, or a kitchen blender would yield similar milling qualities to hand grinders, but this is not the case. The surface area of these machines’ vessels is small. Therefore, cannabis is exposed to the blades in a stagnant “closed batch” state, which results in over-milling of the material to break down all the cannabis so that it can be used for joints. If you’ve tried this, you know that blending larger volumes of cannabis results in a powder, too fine for joints, coupled with larger pieces floating on the surface that never encountered the blades.
This is where “continuous flow” milling systems like the FRITSCH PULVERISETTE 19 are paramount for joint manufacturing. The design of the PULVERISETTE 19 allows cannabis to enter the milling chamber, where it quickly gets pulverized into the desired particle size (dictated by the sieve) before being drawn out of the chamber and into its collection vessel. This offers several benefits when compared to closed-batch setups. Most importantly, the cannabis is not exposed to any prolonged heat or cutting forces, which helps maintain the molecular profile of your cannabis feed stock. Operators can also process large volumes of cannabis at a time without stopping the machine.

We see value in both old-school methods and a more scientific approach. The mixed particles offered by hand grinders can be replicated more consistently and efficiently using the Universal Cutting Mill PULVERISETTE 19.
Additionally, the wide array of sieve cassettes and range of parameter settings offered by the machine allows operators to fine tune particle sizes for different cultivars, joint paper types, and draw behaviour. With the FRITSCH PULVERISETTE 19, joint manufacturers can quickly and efficiently scale up their operation while offering consistent products to consumers. The entire system can be quickly disassembled and sterilized between batches, further adding to overall productivity while reducing employee and equipment downtime. 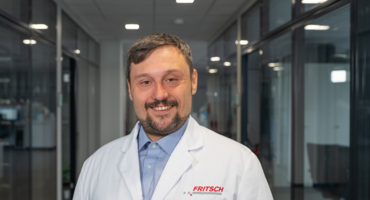 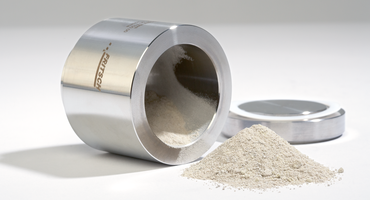