Fraunhofer diffraction, granulometry, static light scattering, laser diffraction. The terminology varies, the technique used is always the same: The light of a coherent light source scattered at particles creates a characteristic angle-dependent intensity distribution, the exact course of which is essentially determined by the particle size.
So, take a laser beam (coherent light!), place the particles at a defined position in the beam and place a suitable detector in the right place. Ready is the particle sizing instrument.
So far, so good.

But as so often, the devil is in the details

How exactly should the laser beam be shaped? Where exactly should the detectors be positioned? What geometry should the detector elements have? How and where do I place the particles in the laser beam? And very important: The particles have to be prepared so that they are available in the required concentration and desired mode - singly or bound in agglomerates. We are talking about the dispersion process. What has to be considered here?
All these questions - and a few more - are answered somewhat differently by each manufacturer of particle sizing instruments. A basic orientation is provided by the ISO standard 13320, which discusses not only general requirements for appropriate instruments and the quality of measuring results with standardized sample systems, but also the basic optical design of the measuring systems. A variant here is the Reverse Fourier design, which was invented by FRITSCH GmbH in the 1980s and developed for the first time to market maturity. The newest generation of the ANALYSETTE 22 from FRITSCH is also based on this design, which has now been adopted by numerous suppliers.

Based on the experience of over 35 years, this current instrument is characterised by a central approach: Keep it simple!
Starting with the light source. In contrast to many other suppliers, FRITSCH uses only one single light source with only one single wavelength. Several wavelengths, especially for very fine materials, theoretically offer the advantage of obtaining more information from the scattering processes for the Mie theory to be used. But anyone who has ever dealt with the practical implementation of these theoretical advantages has quickly had to realize that this is all too often associated with immense practical difficulties and that the theoretical advantages are negligible in comparison. Only briefly touched upon here: With the Mie theory, the refraction index and the absorption coefficient of the sample material must be known for the respective wavelength of the light used. Even for a single wavelength, this often presents a non-trivial challenge. With several different wavelengths, the matter can quickly become confusing.
So, FRITSCH applies just one wavelength. A fibre-coupled green laser is used, which provides the ideal wavelength for the reliable detection of both: large particles down to the millimetre range as well as finest particles well below one tenth of a micrometre. In addition, the system does not use several beams that may come from different directions at different points in the measuring cell, but only a single beam that is easy to control. As said: Keep it simple!

The exact figures: In its full expansion stage, the ANALYSETTE 22 NeXT Nano provides a possible measurement range from 10 nm to 3800 µm. A slightly simpler version (NeXT Micro) allows particle size measurements between 0.5 and 1500 µm and is thus already equipped for a multitude of applications.

But not only the optical design follows the idea of maximum simplicity, the dispersion unit for measurement in suspensions is also based on this principle. Thus, this component of the ANALYSETTE 22 NeXT, which is immensely important for daily work and the success of measurements, works completely without valves in the sample circulation system, a real innovation from FRITSCH. All wet dispersion units available on the market so far have either relied on rotating multi-port valves or on clamping elements, in which, for example, a hose branching in the circuit is squeezed either in one or the other direction and thus plugging. Both approaches have their specific weaknesses. Rotating systems are slow and can be damaged by particles that jam and get stuck in the sealing surfaces. Sluggishness or even leakage are the result. Clamping systems, on the other hand, usually have dead spaces in which particles can already settle during a measurement. In addition, particles can also get stuck in sealing surfaces. By completely dispensing without valves in the sample circulation system, FRITSCH elegantly avoids these problems and thus obtains a reliable, fast, highly flexible and compact dispersion system.

Keyword flexibility: In many, if not most cases, the use of ultrasonic is the method of choice when agglomerates from the sample to be measured need to be degraded. Nevertheless, there are always cases where ultrasonic is not necessary or even harmful. Sometimes it also makes sense to precede an ultrasonic treatment before the actual measurement and then to dispense completely in the main measuring circuit. Here too, FRITSCH consistently follows a new path. The powerful and, of course, variably programmable ultrasonic box is offered as an independent module that can be simply inserted into the sample circuit system. Thus, it is also possible to configure a system completely without an ultrasonic chamber. Just as the respective application requires.

All in all, the ANALYSETTE 22 NeXT represents a flexible and powerful system for particle size determination, which in its entry level version as the NeXT Micro model can also offer an extremely attractive price. And additionally, a later expansion with respect to dispersion (for example through the optional ultrasonic box) or an upgrade of the Micro-version to the NeXT Nano is basically possible. 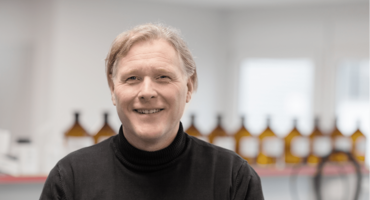